The book is now available for purchase:
Members can purchase a copy for $10, non-members for $12, plus $2.00 shipping.
Click here for the order form: Spider Waits ORDER FORM.

You can also Make a Donation and indicate your interest in the book or get a copy when you Become a Member or for Contributions over $20.

Please Contact Us with questions and requests. All proceeds from the sale of the book will go to JRI. 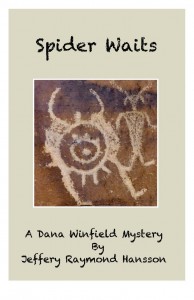 Taking the lug wrench from her hand, he took a step toward the flat tire and paused. Suddenly, he wheeled around and swung the lug wrench at Dana, connecting with her left side.
"Uhhhh," Dana groaned as a sharp pain burned from her rib cage up to the shoulder.
"Damn, what the hell_____."

Before she could finish her shocked plea, he grabbed her and threw her onto the trunk of the Camry.
Quickly he was on her, the weight of his body pinning her as he held the bar of the lug wrench hard against her throat.

“We must talk, Dana.” He loosened the pressure but slightly on her throat.
“I don’t know what you’re talking about,” Dana coughed out hoarsely.

“Pity.” The pressure returned. His face was so close to Dana’s that she could feel the spittle from his lips spray her cheek. The headlights from his car cast over his contorted face. His eyes were wild, menacing, and totally without mercy. He’s going to kill me, she thought, no matter what I tell him. As the wind howled, Dana’s ears began to ache and they were filled with a dull ringing sensation. She started to feel dizzy as he began a soliloquy on how he deserved fame and that no one was going to strip him of his just reward. Her only chance was flight. Stall him until the time is right, she thought. But how much time did she have?

“Look, you don’t want to do this, it’ll ruin you,” Dana said, the words choking their way out as she tried to buy some time.

“Ah, this must be the heroine’s attempt to soothe the savage beast. Won’t work,” he said, pressing the bar harder against Dana’s windpipe. It was so tight she couldn’t swallow. The dizziness returned as she began gasping for air. She could feel herself drifting away, as ringing ears and the distance in his voice told her she was beginning to lose consciousness. Dana knew that if she passed out it was all over. He would toss her into his car, finish her off and dump her somewhere to be dinner for desert creatures.

Suddenly a strong gust of wind crossed the road and hit them, causing him to turn his head and loosen his hold on her. It had to be now. With all her might, Dana brought her knee up and thrust it as hard as she could, driving it into his crotch.

He moaned deeply, dropped the lug wrench, let go of her and grabbed his crotch, falling off the trunk of the car and onto the pavement, writhing in pain. Seizing her chance, Dana sprang from the car and dashed toward the sound of the sign banging on the metal gate. Sharp pain tore through her left side as she reached up to climb the gate. She was almost over when he stumbled into the gate, grabbed her leg and began to tug her back. Dana kicked at him viciously, trying to free herself. With one last kick, she finally broke free from his grasp, but her momentum carried her over the gate and caused her to fall, hitting the rocky ground with a thud. Her right shoulder had taken the full impact, and she lay there groaning as the pain in her ribs and shoulder started washed over her. Time seemed to stand still as her mind became lost in the fog of semi-consciousness. She felt like she was floating, like a cork gently rocked by ripples of water. It was then, in that limbo, that a voice came to her.

Dana’s eyes popped wide open. Having no idea how long she’d been out, she looked over at the gate and saw her pursuer, still wincing in pain tugging at the lock. She couldn’t have been out more than a few seconds. Gathering herself, fighting the pain, Dana got up as predator and prey eyed one another.
“You bastard!” She shouted.

He turned his gaze from her to the sign, and for a reason Dana could not fathom, he smiled. Not waiting to see what he would do next, Dana turned and ran into the darkness, running as far as her legs and lungs would take her, stumbling over rocks, cactus and Four Wing saltbush before the pain in her ribs forced her to stop. Taking a few deep breaths, she fought the pain and started running again. Luckily she was wearing sneakers so that her feet could gain some traction in the sandy and rocky soil. 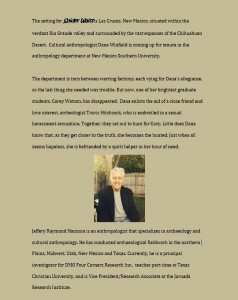 Running for what seemed like an eternity, soon she found herself moving uphill. Her legs began to tire and her breathing became labored. Exhausted, she slowed to a walk, holding her left side as she crested a high hill. Stopping to look back, it finally dawned on her that she had no idea where she was or how far she had come. So extreme had been her fear, her only thought was flight, and survival. The only thing she knew was he wasn’t following her. The wind had abated somewhat, but Dana still could not see anything but darkness, and with that darkness came a stark realization.

“God, I’m lost,” she said quietly as she turned to all four directions. Not a light, not a sound, save the wind, not a thing. She winced as her ribs and shoulders sent new bolts of pain through her body. It was getting colder. Dana hiked the collar of her denim jacket up around her neck. Her only hope was to keep walking.
...