Put these on your calendar if you’re in the area.

The Wa:k O’odham Speak about their History and San Xavier del Bac.

Dr. Seymour will discuss her long-term research regarding Akimel O’odham archaeology and ethnohistory as it relates to San Xavier. Descendants of the Sobaipuri O’odham of Wa:k will join her, including Wa:k O’odham Elder Tony Burrell and Wa:k cultural specialist David Tenario. Their 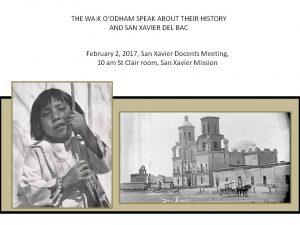 ancestors took care of the mission in its abandoned state, handing it over to the church so that it is here today for our use and enjoyment. The mission and the docents are guests in their community and so it is useful to understand a little about the Wa:k O’odham’s background from their perspective and from in-depth archaeological and historical research. They will show two short videos as well.

The Sonoita Valley has a rich past spanning the prehistoric era into the historic. The valley’s character has been shaped by human-environment interactions. This talk focuses on the early historic period from the time of Father Kino in the 1690s up through the late 1700s when the Europeans first encountered the Sobaipuri-O’odham and when this interaction had its greatest impact. The Sobaipuri-O’odham settlement of Sonoita played a key role in the area through time were central in the area’s history.
10:30 am in the Patagonia Public Library

The Great Battle of 1698 on the San Pedro River
February 13, Sunsights, AZ, at 7 pm in the Sunsites Community Center

Perhaps the greatest historical event to have occurred in the region happened along the San Pedro River in the vicinity of Fairbank on Easter Day in 1698. This was the battle at Santa Cruz de Gaybanipitea when 500 Apache and their allies attacked the still-sleeping Sobaipuri-O’odham village of 80. This was a village visited by the Jesuit Father Eusebio Kino in the 1690s. Against all odds, the Sobaipuri-O’odham won. The story is 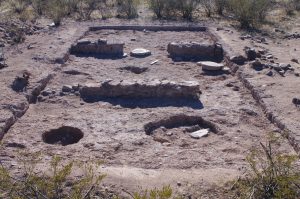 remembered because it was retold and recorded by a number of Spaniards, including by Padre Kino, but fresh understandings are now available that make the story even more important. Seymour corrects the historical record with new translations of historic battle-related documents. She moves beyond what the Spanish conveyed about the battle to include results of archaeological excavations and analysis and application of O’odham-specific cultural information that explains a number of problems including why Kino was delayed in his inspection of the battlefield. The reasons for the battle are discussed and long-held questions are answered including the role of the Spaniards, routes of retreat, evidence of ritualized site cleansing, how we can be certain we have the correct location, and where specifically the Sobaipuri went after the battle. A newly identified battlefield signature is discussed based on projectile point breakage patterns. Projectile points also provide important indicators of the various ethnic groups involved: the Jocome, Jano, Manso, Suma, and Apache