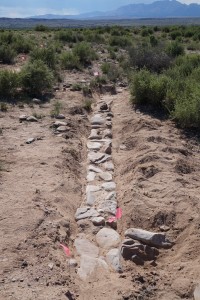 During the 1600s, Spanish observers considered the pueblo of Pilabó to be el pueblo principal de la nación Pira [sic]. Pilabó was the site of the first Franciscan mission among the Piros, established in the spring and summer of 1626, and has been known ever since by the name Socorro. The pueblo was destroyed by Spanish troops in the aftermath of the Pueblo Revolt of 1680 and never reoccupied. With the establishment of the Hispanic puesto or plaza of Socorro in the earlier 1800s, the ruins of Pilabó vanished from sight. Recent archaeological research in downtown Socorro has now identified the first structural remains of Pilabó Pueblo. A combination of surface and subsurface data indicate the general location and layout of the pueblo under the present town of Socorro.

In tandem with the work at Pilabó, a long-term research project has been initiated at the only surviving Piro mission pueblo of Tzelaqui/Sevilleta. This colonial-period occupation of this pueblo is relatively well documented through Spanish sources. A contemporary of Pilabó, Tzelaqui was reestablished (following a short period of abandonment) in ca. 1628 as a reducción pueblo around the mission of San Luis Obispo. Like Pilabó, the pueblo was destroyed by Spanish troops in 1681 and never reoccupied. Unlike Pilabó, however, the site of Tzelaqui/Sevilleta was never built upon, as a result of which the pueblo’s main components have survived as mounds of structural debris. The first season of work at Tzelaqui has already produced a number of unexpected results, foremost among them the realization that the location of the San Luis mission has been misidentified since the days of H. P. Mera. Tzelaqui/Sevilleta is a unique site in that it incorporates pre-contact components, a mission compound that seems to have been largely unstaffed during the mission period, a possible camino real-related structure or Spanish “refugee” estancia dating from the late 1660s, and one or two room blocks built for/by people from other pueblos as part of the reducción effort of the late 1620s.