JRI Research Associate Joan E. Price will be giving a presentation as part of the Southwest Seminars Lecture Series.

Identified by Dr. Kay Sutherland (Spirits From the South, The Artifact, 1996), and others, numerous “collared jaguar” glyphs, a Mesoamerican image associated with ritual warfare and royalty, are found depicted in the Mimbres style on significant stones among over 21,000 glyphs at Three Rivers Petroglyph Site. The possibility that Mimbres culture appears to have assimilated the elite Jaguar cult into a Mimbres hunt/warrior society in a far more equalitarian small-scale society and sacred landscape is discussed and then compared to a Tewa Puebloan ritual calendar of hunting and agricultural ceremonial events and activities outlined by Alphonso Ortiz, The Tewa World, 1969. 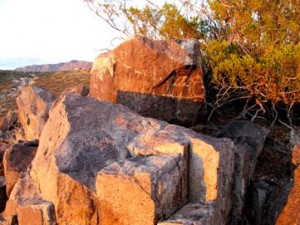 The possibility that at least three jaguar sites with clusters of associated glyphs in Mimbres style of iconography may have served as shrine sites will be presented in a power point format by Ms. Price, who has visited this major petroglyph site in south central New Mexico for over twenty years.