Discovering the “Discoverers”; a presentation by Dr. Deni Seymour
For the past year and a quarter we have been working on a set of new Vasquez de Coronado sites. They are the first sites from this expedition discovered here in Arizona. The evidence of this earliest European expedition into southern Arizona is robust and unquestionable. This discovery is supported by an abundance of evidence. This evidence has been confirmed by other professional archaeologists and historians who specialize in this time period and Coronado expedition sites specifically.
Of course, the Coronado expedition brought the first Europeans to southern Arizona during the 1539 to 1542 period. This route is perhaps the most sought-after trail in the American Southwest, the most intriguing expedition through the region, largely because of its mystery. The route had been lost to history. People have been looking for centuries for the route of Vasquez de Coronado.
These recent archaeological discoveries have uncovered evidence of a sizable Coronado presence in southern Arizona, the first such site to be discovered between Culiacan, Sinaloa (Mexico) and Zuni, New Mexico (USA). This is one reason the site is so important, because the largest site is the first site related to this expedition found in Arizona. Sites have been found in neighboring New Mexico and in Texas, but nothing had been found between the start point in Sinaloa and the original destination of Zuni New Mexico. This 1500-mile stretch has been relatively unknown with respect to this expedition.
The abundance of evidence is astonishing. For one, the site is huge, much larger than expected, it is 1 km long, with multiple clutters of activity, including six lookout stations. There’s evidence of a battle. We can see these early Europeans being chased across the landscape. We see this in the distribution of items, such as crossbow bolt heads, lead shot, pieces of weapons, and other artifacts…as well as in the distribution of stone O’odham arrow points.
We now have a total of three sites…which only confirms the mystery is beginning to unravel and southern Arizona is central to this story.
Talk
I will be giving a talk on January 29 at Tubac presidio, to serve as a fund raiser for the presidio. It will be at 2 pm.
Here’s a link to a short video:
Discovering the “Discoverers” in Arizona
https://youtu.be/q3RVbdYTwDw
Seating is limited. It will be outdoors, bring your own chair.
Sign up at: info@tubacpresidio.org,
or call (520) 398-2252 to reserve space.
Period weapons will be on hand with weapons experts available for discussion. 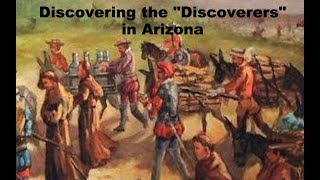 Discovering the “Discoverers” in Arizona